The flight scenario of QARMAN is shown the figure above. There are 5 phases planned for the mission:

Right after deployment at an altitude of 380 km starts the commissioning phase, during which the on-board computer is booted, the UHF/VHF antennae are deployed and all systems are checked (For safety reasons during launch the batteries are fully charged but all systems are switched off to avoid electro-magnetic interference with the launcher telemetry). It is expected that QARMAN will tumble after deployment at a rate of lower than 10 degrees per second. Using a combination of inertia wheels and magnetorquers, the satellite will be stabilized or detumbled. This phase is expected to last three days, after which QARMANs attitude should be known within 2 degrees of uncertainty.

During phase 1, which lasts about one month, the satellite will attempt to “chase” a target satellite by controlling the surface exposed to the residual atmosphere. This is done by altering the angle between the satellites principle axis and the direction of flight, thus controlling the atmospheric drag which experiences the satellite. This is possible because, contrary to popular belief, there is still a residual atmosphere, even at altitudes above 300 km. Indeed, the atmospheric pressure at this height (in the so-called thermosphere) is slightly less than 0.1Pa, or one millionth of the atmospheric pressure at ground level.
Thus, by changing QARMAN’s attitude, it is possible to change its drag force. This force is used as a propulsive means to control the trajectory, and to come as close as safely possible to a target satellite (or a virtual target). During the phase 1 the solar panels will be kept in stowed configuration (as shown below), in order to keep the inertia low to be able to steer the satellite with on-board actuators.

During this phase, the AeroSDS panels are in folded configuration, as shown in the following figure. 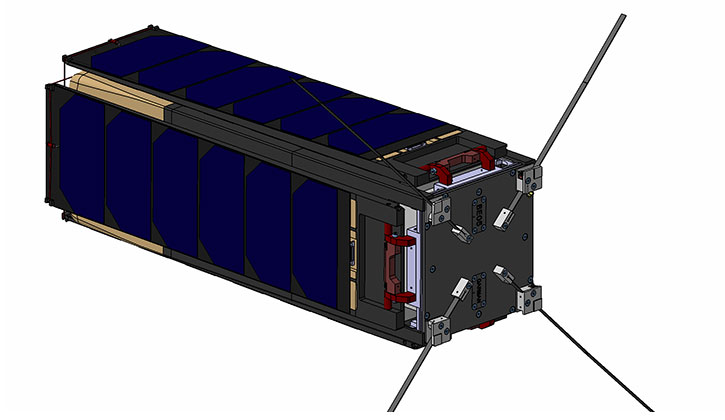 At the end of phase 1, the satellite is expected to have an altitude of 320km. Upon completion of the Differential Drag experiment, the side panels will open to rest at an angle of 15 degrees with respect to the satellite axis. This results in an increase of aerodynamic drag, thus a decrease of velocity. Hence, the satellite will slowly de-orbit.

The following figure shows the satellite with deployed panels. 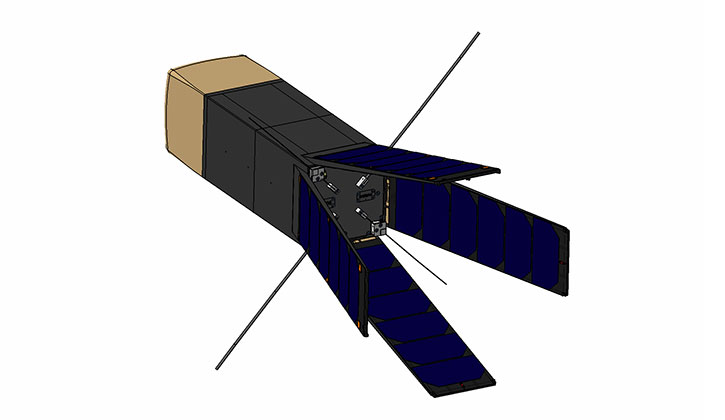 This phase is placed between phase 2 and 3 to prepare the satellite for re-entry, where the unnecessary sub-systems will be switched off. The satellite will cool down and the batteries will be charged in order to survive during re-entry.

Phase 3 is the re-entry part of the mission where various sensor data will be acquired, processed and logged. This is the most critical part of the mission, as the satellite is subject to very high temperature and hypersonic velocities. Gas temperatures around the satellite are expected to exceed 10000K (more than 50% hotter than the surface of the sun.), while the satellite flies through the upper atmosphere at Mach 27. To protect the electronics during the re-entry, several layers of high-tech insulation (so-called Aerogel) and special ablative material are implemented on the satellite. Due to the extremely high temperature, a cloud of free electrons exists around the satellite. As a consequence, no data can be transmitted during the re-entry. This is the infamous “black-out window”. Instead, the acquired data is stored on a flash disc, and the compressed data is to be transmitted once the blackout has terminated (at an altitude of around 45 km), towards the Iridium constellation. The data budgets are calculated such that all data can be safely transmitted in the short time frame between the end of the black-out window and the satellites’ crash on ground.
After the phase 3 QARMAN will safely crash-land on ground, providing valuable data for future atmospheric research.