The general system design is shown below. COTS (Commercial off-the-shelf) available sub-systems have been purchased from manufacturers. Items that are not commercially available are being developed by the QARMAN team. These include the OBC, the structure, the Data Acquisition board (DAQ) and the complete thermal protection system (the Survival Units, SU). 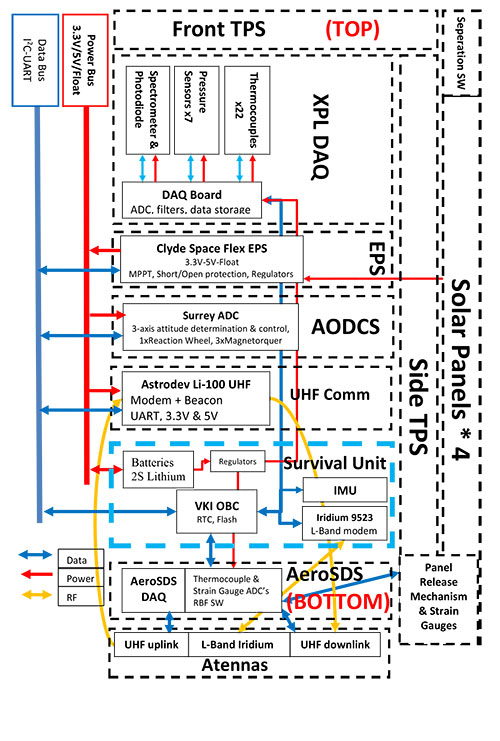 The following figures show in more detail where the different subsystems are located into the satellite. 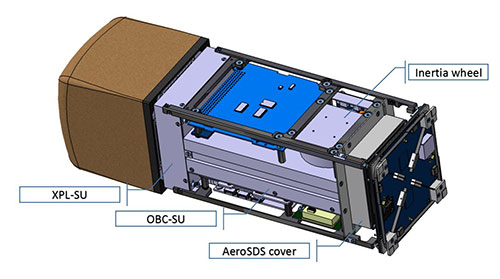 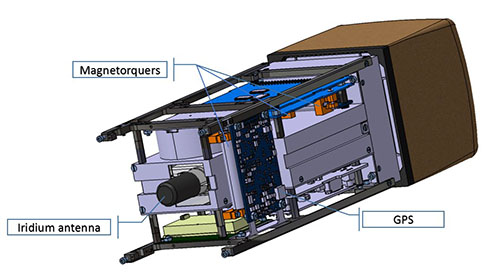 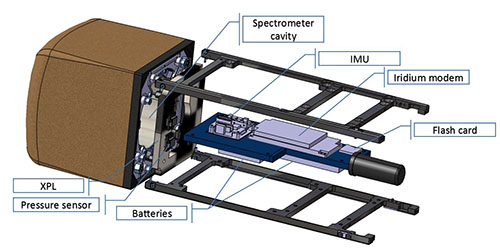 The thermal design of the QARMAN CubeSat, with special attention to the re-entry phase, is a major topic. In fact during the atmospheric re-entry, the CubeSat will interact with the atmosphere at hypersonic velocity and, due to aerodynamic heating and exothermic chemical reactions, it will face temperatures which can go over 2000 K.
Protecting the CubeSat components from those heat fluxes is one of the most critical aspects of the mission: designing a TPS capable to protect the satellite within the standard dimensions of a 3U CubeSat, is a challenging and delicate task. After a preliminary study, the QARMAN team efforts were oriented to protect only those components necessary to complete the re-entry phase of the mission, designing a “Survival Unit” capable to keep the electronic components within the operative limits for the entire re-entry phase. Nevertheless this design shall be thermally compatible with the orbital thermal environment as well.

Front Thermal Protection System (TPS)
An ablative cork TPS is protecting the front part of the satellite during re-entry.
The material selected after a detailed TPS selection campaign is the P50.

Side and Back TPS
A ceramic layer of SiC constitutes the side panels of QARMAN. This protective shell will cover all the lateral sides of the satellite, protecting from the reentry heat fluxes. Moreover, a thin layer of FiberFrax insulation is placed between the side TPS walls and the internal structure, providing further insulation and protecting the CubeSat structure.

Survival Unit (SU) Concept
The idea is to collect all the components needed to complete the re-entry phase on one single PCB board, surrounded by a dedicated TPS. The thermal protection will be achieved with a layer of Aerogel, a lightweight and low-conductance material which will protect the electronic components from overheating. The aerogel is a brittle and structurally weak material, so a Titanium box is used to cover the entire SU and to connect the Survival Unit to the rest of the structure. The part of the Cover Box surrounding the Iridium Antenna, has been designed in ceramic material, to reduce EMI. The SU walls are also coated with a low emissivity/low absorptivity material, to reduce the radiated heat flux effects on the SU.
The components needed to be functional up to end of re-entry (ground impact) are: the OBC, the Iriudium modem, the batteries, the IMU, all the needed regulators. All this components are placed on a unique PCB, which is glued to a thick plate of aluminum, which serves as heat sink. Everything inside the SU.
Also the XPL DAQ board shall keep on functioning up to 45-50 km of altitude. For that board is foresee a dedicated Survival Unit placed just behind the cork TPS.

An innovative concept for passive stability is employed for QARMAN based on the aerodynamic forces. Typical satellites are using either passive control via permanent magnets which aligns itself with the magnetic field lines or active control elements like reaction wheels and magnetorquers. These active mechanisms have major drawbacks due to the power consumption of the system during actuation which could be too demanding for small scale satellites like CubeSats. Furthermore they have a strong impact on the mass and volume budget. However the main issue preventing their usage on QARMAN is that the disturbance forces below 150km of altitude are too large to be counteracting with a reasonable sized systems.

Therefore QARMAN employs an Aerodynamic Stability and De-orbiting System which relies completely on the aerodynamic forces acting on the satellite. This passive system has the advantages of no power consumption after deployment and that the restraining forces are increasing with decreasing altitude similar to the perturbations. This makes the system ideally suitable for the QARMAN mission allowing the satellite to perform the complete re-entry with a controlled attitude.

A trade-off campaign was performed to identify the best solution of the AeroSDS used on QARMAN keeping in mind the different requirements on the system like compatibility which orbital and re-entry phase, a reliable and simplified system, the interoperability with other systems like power generation and the target lifetime in orbit from deployment altitude. As an example the effect of different systems on the lifetime is shown in the following picture and gives evidence of the customable design to satisfy the mission needs for faster or slower de-orbiting.

A design based on four ceramic panels with a length of approximately 30cm and inclination of 15° with respect to the longitudinal axis was chosen due to the good performance in orbit and during the re-entry mission. To ensure a smooth outer surface and transition without gaps from the sidewalls to the panels, a deployment based on two simultaneous motions (rotational and translational) was implemented for the AeroSDS. Sufficient generated power during the first phases in orbit is ensured by the integration of solar cells on both sides of the deployable panels. 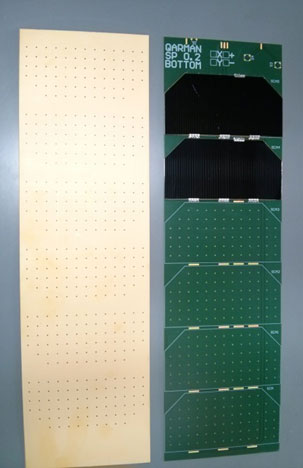 Due to mission re-entry requirements the only place available for solar cells is on both sides of the the deployable AeroSDS panels. Indigenously developed solar panels will be mounted to AeroSDS panels to generate the necessary power during the entire mission. The solar cells will safely burn-out during the re-entry without compromising the mission, as a set of space-rated batteries will take over the job. The picture below shows an array of solar cells being glued to the solar cell PCB. 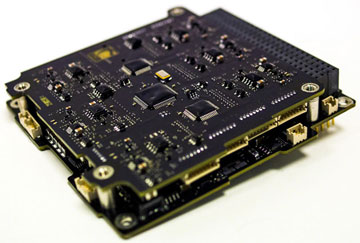 In order to supply continuous power during the re-entry phase, where solar cells are burned off, a battery sub-system has been designed. COTS batteries are tested for space environment compliance in the Von Karman Institute long shot facility. The batteries, protection circuitry and regulators will be placed in the survival unit to survive the re-entry environment.

XPL stands for Aerothermodynamics Experiment Payload. These are the scientific payloads that fly on board of the satellite to investigate the thermal behavior of the Thermal Protection System (TPS) during the re-entry.

There are 6 sub-payloads with different aims in XPL:

TPS Efficiency Payload: The objectives of this payload are to measure the heating and the ablation of the front TPS, which is made of Cork P50. This can be done by temperature measurements. Thermocouples are inserted in plugs which plug in to the front TPS.

TPS & Environment Payload: This payload consists of pressure measurements in the front part of the vehicle to understand the aerothermodynamic environment together with the XPL01. It will allow us to later reconstruct the trajectory and will also act as input to understand the ablative material behavior and efficiency.

Stability Payload: This payload aims to determine the stability of the satellite during the re-entry phase of the mission by measuring the static pressure on the side panels of the spacecraft.

Shear Force & Transition Payload: Sharing the same pressure sensors with the former payload, the objective of this payload is to determine whether or not a laminar to turbulent transition will happen. The side pressure ports also contribute to CFD validation.

Emission Spectroscopy for Radiation Payload: an emission spectrometer is inserted in the TPS nose to monitor the species concentration and temperatures of the stagnation point of the vehicle.

The XPL PCB is placed in the front part of the satellite, right behind the TPS nose.

One of the main challenges of the mission is to ensure the survival of at least some critical parts of the satellite during the re-entry. To achieve this challenge QARMAN is divided in two different parts, where the non-critical parts of the satellite are allowed to overheat during the re-entry, but re-entry active systems are thermally insulated in so-called survival units (SU). The survival units are heavily insulated boxes in which all electronics that must survive re-entry are placed. Amongst those are the OBC, the INS, the Iridium modem, batteries, regulators and switches. The figure below shows the OBC PCB with INS, modem, flash card and batteries.

The insulation is done using a novel material called aerogel. This is a ultralight (only slightly heavier than air, which earned it the nick-name “frozen air”), ultra-isolating material (thermal conductivity of the order of a few mW/m2). Below is a picture of a block of aerogel (source: Wikipedia)

The company Voxdale performed a series of mechanical calculations to virtually check the integrity of the satellite structure. This is needed to ensure that the structure can handle the (sometimes heavy) vibration and load stresses acting on it during launch and re-entry. The following figure shows an exploded view of the model. 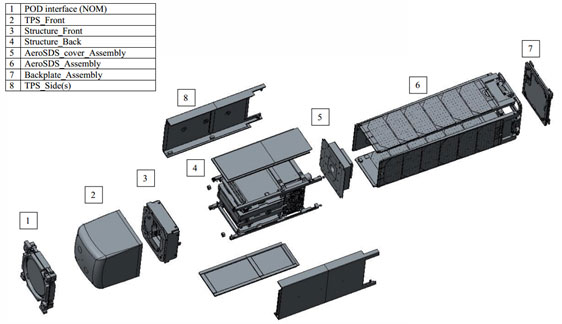 First, the CAD geometry was simplified to suit FEA methods. This is shown in the next figure.

Secondly, non-linear submodels were constructed to analyse the behavior of spring-loaded mechanisms.
Thirdly, the results were translated into a linear global model that was used for:

The figures below show amplitudes due to vibrations induced by the launcher, and corresponding von Mises stresses. 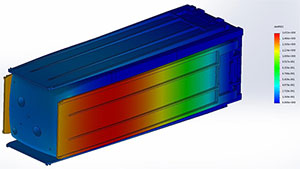 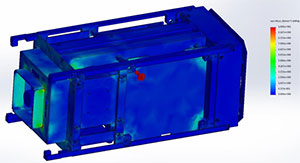 UHF modem which is used while the satellite is in orbit, is an AstroDev Li-100. This modem has extensive flight heritage. 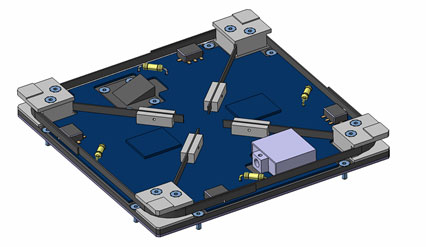 The Iridium modem, used right after the re-entry black-out phase tos end the scientific payload data to the Iridium constellation is a COTS Iridium 9523 modem.