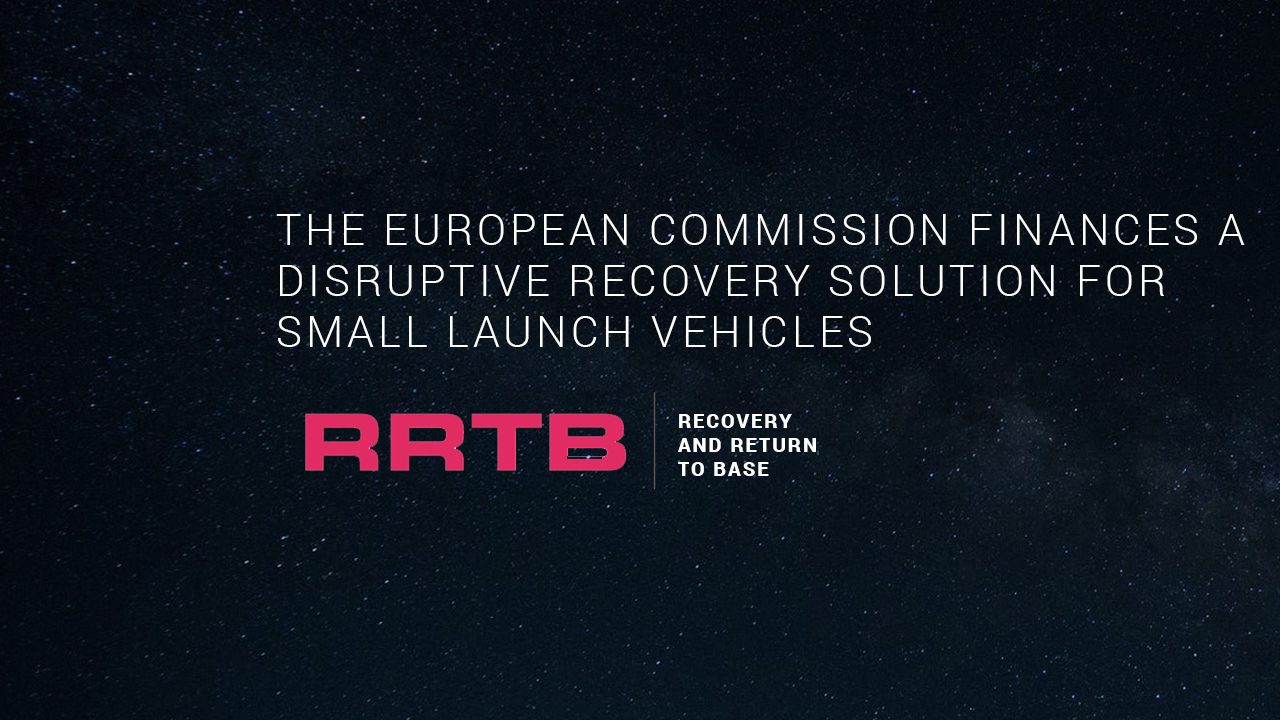 With the rise of the small satellite industry launch vehicles need new solutions to offer a tailored and cost-effective access to space. The space industry took a big leap forward when SpaceX started recovering the first stage of its rockets, thus decreasing launch prices drastically. Currently, reusability is one of the trending topics in the launcher industry.

The Recovery and Return-to-Base (RRTB) project received more than €3M from the European Commission’s H2020 program to investigate the recovery of the “MESO” micro launcher. Based on the Barcelona start-up Pangea Aerospace’s initial research the project seeks to validate and further develop this new technology. The RRTB consortium, coordinated by Pangea Aerospace, is composed by 8 experienced partners in the aerospace sector from 6 different European countries. 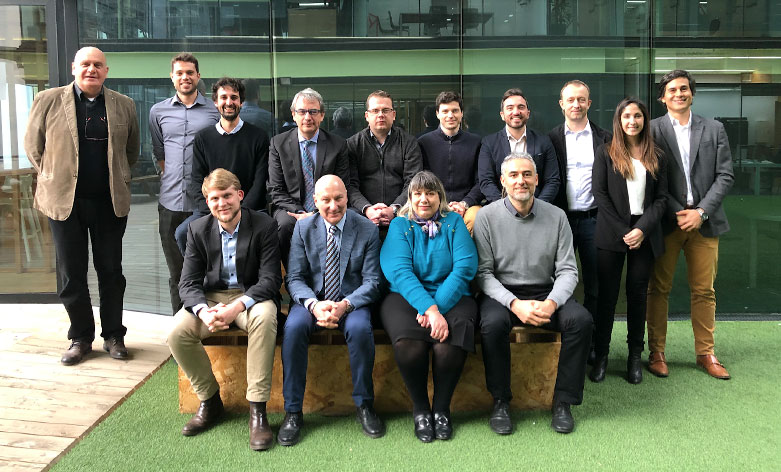 The major objective of the project is to validate key technologies for safe and cost-effective recovery and reuse of the first stage of a small launch vehicle. At this regard Rasmus Bergström, technical coordinator of the project, stated: “this landing system uses already existing and proven technology from the Urban Air Mobility and drone sectors, thus reducing the development and production costs” and Xavier Llairó from Pangea Aerospace affirms: “To our view, high rate and high component reusability is essential to decrease launch costs in the micro-launcher industry.”

The project will:
- Validate an innovative landing system, incorporating electric ducted fans. This European recovery system would allow a soft and precise landing without using the main engine, enabling high component reusability.
- Investigate the atmospheric re-entry of the first stage of the MESO micro launcher.
- Design of durable and cost-effective solutions for reusable structural design and cryogenic tanks.

The technology of Electric Ducted Fans has been largely investigated by other European companies and research centres in the context of Drone and unmanned aerial vehicles (UAVs) development, mainly for VTOL (Vertical Take-off and Landing) aircrafts. However, it was never transferred to a space sector. The experts selecting this project for the European Commission agreed on its technical impact and excellence.

Davide Bonetti, from Deimos Space stated: “One of the major challenges of this project will be to verify the feasibility of the return of the first stage of the rocket. Several missions and configurations will be studied in order to choose the most promising one”

The RRTB consortium combines the industrial expertise of Thales Alenia Space, Deimos Space, Heron Engineering, TOSEDA and Pangea Aerospace with the research experience and excellence of the von Karman Institute for Fluid Dynamics (VKI), RWTH Aachen and Technische Universität München in order to create a disruptive European recovery technology to reduce the cost of access-to-space.

The von Karman Institute for Fluid Dynamics will investigate the dynamic and static stability of the first stage during its atmospheric reentry in order to better predict its trajectory.

More information about the project can be found at www.rrtb.eu

This project has received funding from the European Union’s Horizon 2020 Research and Innovation program under Grant Agreement no. 828301

Pangea Aerospace is the coordinator of the project. The company is devising the next generation of rocket launcher technology based on reusability and efficiency through a disruptive recovery system as well as an innovative 3D-printed aerospike engine. In the new space ecosystem, the number of satellites sent to space is growing continuously and there is not enough supply of launches to cover the new demand. Pangea will target this underserved demand, thinking ahead in the market cycle, focusing on advanced technologies to reduce costs.The company is supported by a top advisory board, including the ex-president of ESA (the European Space Agency), as well as the ex-president of the French Space Agency (CNES), among others. It has received support both from European and national institutions.

Heron Engineering is a Small Medium Enterprise based in Athens, Greece, which provides engineering services in the aerospace domain – from on-going development projects to R&D projects. The main activity of the company is the analysis of structures (stress analysis), using finite elements and analytical (“hand”) calculations, coupled with design competences. The core of the company consists of engineers with experience in European Aerospace Projects and with expertise in Structural Analysis. Heron Engineering, apart its industry contractual work, has been collaborating in R&D projects funded by EU as well as ESA.

The Technische Universität München (TUM) is one of Europe´s leading universities. It has roughly 540 professors, 10.100 academic and non-academic staff, and 41.500 students. It focuses on the engineering sciences, natural sciences, life sciences, medicine, and on economic sciences. After winning numerous awards, it has been selected as an “Excellence University” in 2006 and 2012 by the German Science Council (Wissenschaftsrat) and the German Research Foundation (DFG). In both national and international rankings, TUM is rated as one of Germany´s top universities and is dedicated to the ideal of a top-level research-oriented entrepreneurial university.
Institute of Flight Dynamics: With its main research areas flight controls, sensor data fusion & navigation, flight trajectory optimization, and flight guidance, the Institute of Flight System Dynamics of TUM (TUM-FSD) holds in-depth experience pertaining to flight mechanical design, to both flight performance specification and implementation and to the development of flight control algorithms. The Institute operates a fully instrumented research aircraft, a research flight simulator, a level 5+ flight simulator and multiple UAVs. In addition to its contribution to various national and international research projects (including participations in FP7, H2020, CleanSky and EDA research projects such as RECREATE, INCEPTION, PALAST or NICE, respectively), the institute also cooperates within industry funded projects and other contractual research. The Rheinisch-Westfälische Technische Hochschule Aachen (RWTH Aachen University) with its 260 institutes in nine faculties is the largest university for technical study courses in Germany with more than 45.000 students. During the last five years, the university was nominated by the German Federal Government twice in a row as excellent. It is a member of the national TU9-Aalliance (U9 German Institutes of Technology) which is an association of the nine most prestigious, oldest, and largest Technical Universities in Germany. The Institute of Structural Mechanics and Lightweight Design (SLA) belongs to the faculty of Mechanical Engineering, the biggest one within the RWTH Aachen University. The faculty contains more than 50 teaching and research facilities as well as currently 63 professorships subserving more than 12,000 students. The institute is focused on teaching and research in the cluster of Aero- and Spacecraft Technology, especially in the field of design and sizing of aerostructures.

Drawing on over 40 years of experience and a unique combination of skills, expertise and cultures, Thales Alenia Space delivers cost-effective solutions for telecommunications, navigation, earth observation, environmental management, exploration, science and orbital infrastructures. Governments and private industry alike count on Thales Alenia Space to design satellite-based systems that provide anytime, anywhere connections and positioning, monitor our planet, enhance management of its resources, and explore our Solar System and beyond. Thales Alenia Space sees space as a new horizon, helping to build a better, more sustainable life on Earth. A joint venture between Thales (67%) and Leonardo (33%), Thales Alenia Space also teams up with Telespazio to form the parent companies’ Space Alliance, which offers a complete range of services. The Company is a major contributor to the International Space Station (ISS), responsible for over half of its pressurized volume, and played a major role on the ATV (Automated Transfer Vehicle) cargo vessels for ESA and on NASA's Cygnus program, which brings supplies to the ISS. Thales Alenia Space has leveraged its unrivalled expertise in orbital infrastructures and space transport, including the IXV, a huge success that paves the way to future European re-entry missions, and the pressurized compartment on SOAR (Sub-Orbital Aircraft Reusable), which will carry both scientific experiments and astronauts. Thales Alenia Space will also be a leading contributor to the Orion Multi-Purpose Crew Vehicle (MPCV) being developed by NASA.

The von Karman Institute for Fluid Dynamics (VKI) is an international educational and research institute devoted to the field of Fluid Dynamics. It was founded in 1956 by a number of NATO countries and the US and Canada. The Aeronautics and Aerospace Department has been working on many programs devoted to re-entry vehicles and general aerothermodynamics. VKI has a broad experience in numerical, theoretical and experimental investigation of hypersonic flow field phenomena. The H-3 (Mach 6), Longshot and Plasmatron (high enthalpy) facilities are the main experimental tools utilized at the von Karman Institute to study the aerothermodynamics of space vehicles. The von Karman Institute has been involved heavily in international programs of ESA such as Hermes, MSRO, EXPERT and IXV. Thanks to its unique facilities and its expertise, VKI has been recognized as reference laboratory of ESA.

DEIMOS Space is the technology company within the ELECNOR Group specialised in the design, engineering and development of solutions and systems integration in the aerospace, satellite systems, remote sensing, information systems and telecommunications network sectors. In the space sector its expertise encompasses Mission and Flight Engineering, Space Situational Awareness, Ground Segment Systems, Flight Software Systems and Global Navigation Satellite Systems. DEIMOS Space will be leading the mission design and development activities including: trajectory design, orbit and launch site selection, risk and safety assessment, feasibility assessment, requirement definition and will be performing GNC and Flying qualities tasks towards a safe and reliable way to control the vehicle during the re-entry and landing phase of the mission. DEIMOS Space will also investigate the passive atmospheric reentry of the first stage together with Pangea Aerospace and Von Karman Institute.