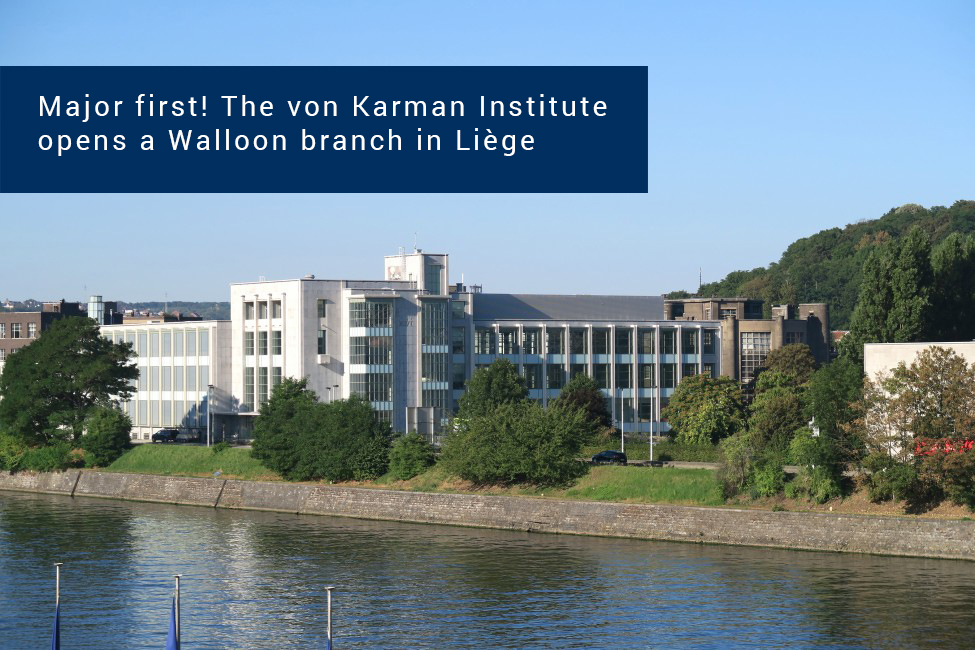 The von Karman Institute announces the opening of a new office branch in Liège at the Val Benoît site, starting January 2021. Thanks to funding from the Walloon Region and to the result of active collaboration between the VKI, Safran Aero Boosters and other Walloon aeronautics companies and institutions, the team at Liège will work on research projects for a new generation of greener and more efficient aviation engines and technologies.

The team in Val Benoit, which will number 10 people in the short term, will work in close interaction with the teams at the Rhode-Saint-Genèse site, where the experimental facilities are located, to achieve the following ambitious objectives of the WINGS program:

The experimental facilities of the main site in Rhode-Saint-Genèse are world-wide renown as key enablers for research and innovation in fluid dynamics. Essential for the present research projects are the unique turbomachinery test facilities, capable of simulating engine-realistic conditions.

Willy Borsus, Vice-President of the Government of Wallonia, Minister of the Economy and Research:
"It is a source of pride for Wallonia to welcome on its territory an institution as prestigious and of high level as the von Karman Institute. Our flagship companies active in aeronautics will clearly be able to benefit from the Institute's expertise and increase their development. This project is part of the continuity of the Partnership for an ambitious and sustainable Walloon aeronautics industry for which a subsidy of € 41.42 million has been mobilized by the Government of Wallonia. Our Region clearly wants to position itself as a land of innovation, research and excellence. These are the fundamental pillars of our economic recovery.”

About WINGS: WINGS (Walloon INnovations for Green Skies) is the trademark registered by Safran Aero Boosters to designate an ambitious technological plan to develop technical advances for greener aviation subsidized by the Walloon Region and initiated by Minister Willy Borsus in November 2020. For a period of 3 years, 19 Walloon partners are joining forces to research around the ecological and digital transition of the aeronautics sector with the aim of fully contributing to the EU's “Green Pact”. Its overall budget is 112M € and it is divided into 6 Work Packages.

VKI in short: The von Karman Institute (VKI) is an international non-profit association under Belgian law founded in 1956, exactly 65 years ago! World-renowned, the VKI is specialized in fluid dynamics. This research and educational center located on the suburbs of Brussels trains around 180 students each year from the different countries, everywhere in the world. Its motto is: " training in research through research". As federal institute, this center of excellence employs around hundred people and carries out experimental and numerical studies in the fields of aeronautics and aerospace, turbomachinery and propulsion, as well as the environment and the industrial processes. The VKI is working on research contracts for many companies (CENAERO, SABCA, Safran Aero Boosters, Safran Aircraft Engines, Safran Helicopter Engines, Sonaca, AtlasCopco, Umicore, Bekaert, Numeca, ArcelorMittal, …)  and international organisations (European Space Agency, European Commission, …).