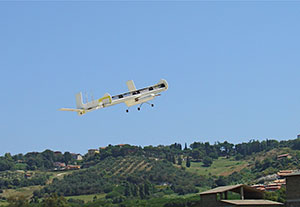 This week, VKI is testing in L-1 a very innovative distributed-propulsion aircraft, designed by Patrick Peebles.

The FanWing is a distributed-propulsion aircraft with a trapped vortex inside the rotor cage. A cross-flow fan near the leading edge of the wing transfers the work of the engine to the air along the entire wingspan. The resulting increased lift from the trapped vortex and the rearward acceleration of a large volume of air offers very short take-off-and-landing with quiet and efficient short-haul heavy lift capability.

The FanWing has safety features of no sudden stall at high angles of attack, no asymmetry if one engine fails and can auto-rotate (like a helicopter) to make a safe landing if all engines fail.

Documented efficiencies for the first prototypes were 20 grams of lift per Watt of shaft power and later wind-tunnel tests indicated 29 g/W.   Recent tests of a large-scale model have enabled the ‘fan scaling laws’ to be established for this novel configuration and this allows performance predictions of large FanWing aircraft to be made. Most recent predictions (July 2011) are that the FanWing will cover more than twice the distance of a helicopter on the same fuel load.

Higher-speed wingshape modifications developed in a wind-tunnel and verified by model flight tests have resulted in new speed estimates for a 15-ton aircraft of 100kt at sea level and significantly more at altitude.  These estimates will be further refined by the ongoing large-scale wind tunnel testing described later.

The recently developed TwinTail configuration, suggested originally by former BAE Systems Principal Concepts Engineer, George Seyfang, avoids the strong downwash flow directly behind the wing and exploits the upwash from the wingtip vortices. The new design has increased the efficiency of the aircraft by between 10 and 15% and also improved pitch stability.

Some obvious applications will be in unmanned surveillance, Ultralight aircraft for sport flying, short-haul freight, fire-fighting, crop-dusting, rescue operations, and city taxi/tourist/police flights. Its potential low sound signature, stability, lightness of construction, slowness and short take-off capability give it potential in both rural and urban applications.

Some words about Patrick Peebles from FanWing Ltd: US-born inventor and technical director of the FanWing project, Pat is self-educated in physics and aeronautics and previously specialised in electronic inventions. He was for some years international area manager for a US-based company before making a full-time commitment to the FanWing. Pat Peebles won the 2001 InterEx International Experimental Aircraft Award For Best New Propulsion System. In 2003 he won the Edward De Bono ‘Thinking’ Prize in the Saatchi & Saatchi International  Awards for ‘World Changing Ideas’. He  received award nominations from the Royal Aeronautical Society (2001), and the international World Technology Network for Ideas Most Likely to Influence the Future (2004). The FanWing was selected for the 2004 New York Times Ideas of the Year. The FanWing Company received two SMART UK Government grant Awards (2002 & 2003) and a London Development Agency JumpStart Connect Award. (2005). Oliver Ahad's Imperial College FanWing Computer Simulation Project Dissertation based on Pat Peebles' FanWing Ultralight designs and specifications won the 2006 Association of Aerospace Universities National John Barnes Award.