The L-6 facility is a low speed, open circuit wind tunnel for the study of plane mixing layers. The wind tunnel is divided into two parts over its entire length by a splitter plate, which originates at the exit of the duct from the two fans and has sharp trailing edge with a wedge angle of 1.2º at the contraction exit.  The two-dimensional contraction ratio is 6:1. The spanwise length is 0.3 m and the test section where the mixing layer develops has a cross-section of 0.3 m x 0.2 m.  Velocity can range from 1 to 20 m/s.

The wind tunnel has been adapted to the study of turbulence modification induced by particulate laden flow.  To create the two-phase flow, an ultrasonic spray nozzle produces tiny droplets with a very small initial momentum in one of the air streams.  Advanced measurements techniques such as Phase Doppler Anemometry, Particle Image Velocimetry and Particle Tracking Velocimetry and Sizing can be accommodated.

The wind tunnel may also be equipped with several interchangeable rectangular test sections placed at the exit of the left jet.  These test sections allow the investigation of internal two-phase flows, and in particular of particles / vortices interaction, within various geometries, including cavities. 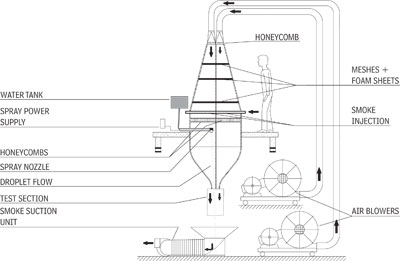