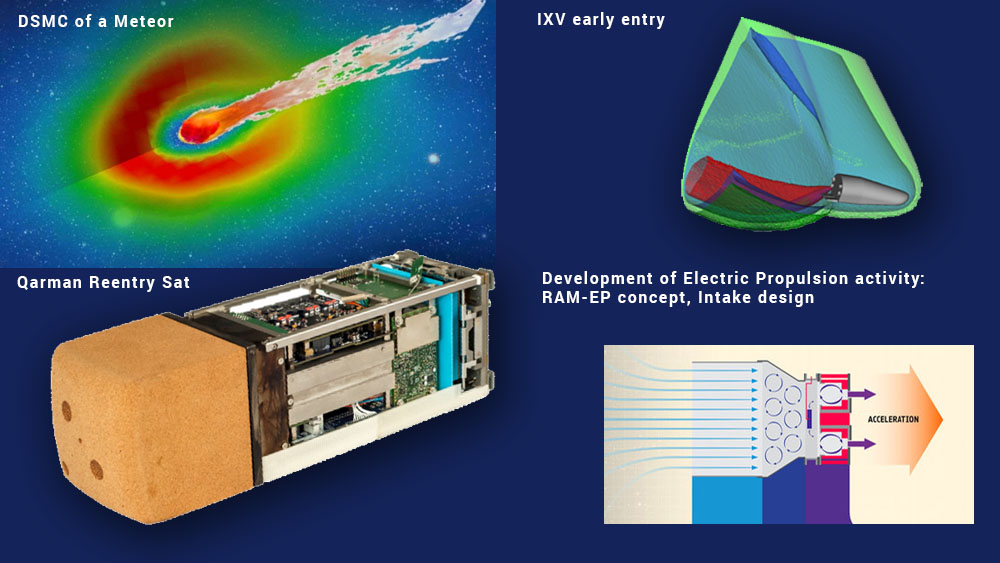 QARMAN Mission
QARMAN is the “QubeSat for Aerothermodynamic Research and Measurements on AblatioN” of VKI, initiated in the framework of QB50 project and developed under an ESA-GSTP contract. The QARMAN project goals are twofold: First, it will demonstrate the use of a passive de-orbiting system and second, it will collect scientific data during its entry to Earth's atmosphere.
In early 2019, QARMAN CubeSat was fully integrated at VKI. Then it successfully passed the qualification and acceptance test campaign, including vibration test, thermal vacuum cycling, end-to-end and functional tests. Residual dipole characterization and demagnetization were also performed. QARMAN has been delivered to the launch provider and launched to the International Space Station on December 5th (SpaceX Falcon9 + Dragon cargo spacecraft). The CubeSat has been successfully deployed from the ISS on 19th of February 2020. It will then orbit around Earth for a period of 7 months before re-entry into atmosphere.

RAM-EP
An ESA Express Procurement (“Assessments to Prepare and De-Risk Technology Developments – RAM Electrical Propulsion for Low Altitude Satellites”) aims to support the optimization of air-breathing electric propulsion system for the development of a new class of missions in Very Low Earth Orbit (VLEO). The project has provided an implementation plan for the development of an intake-collector system based on preliminary design requirements. The possible characterization of the performance under the relevant laboratory conditions has been studied.
Following this  ESA project, the H2020 AETHER project kicked off in 2019 to demonstrate, in a relevant environment, the critical functions of an air-breathing electric propulsion system. Based on an Sitael’s ESA TRP study, «Assessment of Key Aerothermodynamics Element for a RAM-EP Concept»,  the ambition of AETHER is to provide Europe with a TRL 5 RAM-EP system capable of full-drag compensation and integrable in a space platform, making it a viable option for long lifetime operation of  platforms in VLEO and for filling the currently existing gap between sounding rockets and satellites in LEO.

BRAMS
The Belgian Radio Meteor Stations (BRAMS) experiment consists in a series of receivers spread all over Belgium to collect and standardize the meteor observation data. Two PhD thesis sponsored by FRIA-FRS and FWO have been set-up to interpret the BRAMS observation data, in both the rarefied and continuum regimes. In particular, a material solver has been developed in order to solve the Stefan problem and understand better the melting of meteors. Furthermore, the material solver has been coupled with CFD and DSMC solvers with an integrated evaporation boundary condition and part of a meteor-entry trajectory.

Professor in the Aeonautics and Aerospace Department